I am really proud of this film. We went all over the world to meet the Podcasting fans, and it was one of the best experiences of my life. We explore the personal connection between podcasters and fans and the stories we heard were both moving and heartfelt. It’s available everywhere and you can buy a signed DVD HERE in the store.

Short film. Ah, those were the days! Hitmen, Clowns, Leprechauns, Living Suits, Killer Doughnuts and Angry Street Cleaners can all be seen in my short film compilation MYOPIC VISIONS. You can catch them on YouTube, or get the DVD with all the bonus extras in the store HERE. I still have a few left.

ASYLUM
It’s out now, although I can’t say it went well. I think it’s the only time a studio managed to ruin the same movie twice. They bought my horror script, threw it away, brought me in to fix the movie and make it a comedy, and then ruined it again and never changed the title to reflect the change in genre. Honestly, it must be seen to be believed. But if you know the story and know you’re in for a hot mess of a horror comedy, you may just have a decent time. For the full story, listen to the Comedy Film Nerds Podcast Episode 219 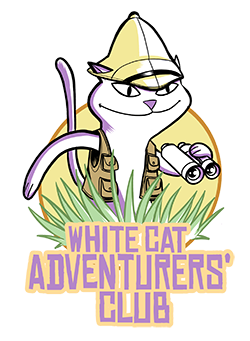 Make a One Time Donation!

White Cat Entertainment is powered by the generousity of our fans and friends.